Two suspects hanging out together were contacted at two different locations and each was arrested…at different times but similar crimes. Grass Valley Police Sgt Steve Johnson says that officers originally responded to the report of a confrontation at a transient camp in a wooded area in the Brunswick Basin around 3:45 AM Thursday. Two transients, 31 Mike Krzyopolski and 30 Shawna Heinz, were contacted.

Heinz’s heart rate was elevated, she was fidgety , and her eyes were dialated along with other symptoms. An officer conducted a field evaluation and determined she was likely under the influence of a stimulant. Heinz did admit to using methamphetamine and she was taken into custody for being under the influence. Krzyopolski was not under the influence or in possession of any contraband so he was released. 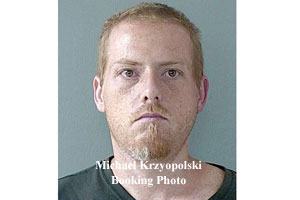 About six hours later officers were dispatched to the Safeway in the Brunswick Basin to a report of subject smoking marijuana
and loitering around the business. Officers arrived to find a familiar couple- Krzyoploski and Heinz. Though the couple had no money for food or housing, both had smartphones which they were illegally charging at an outlet on the side of the store.

This time Krzyopolski was arrested for possession of a controlled substance, possession of paraphernalia and violation of probation. However, Shawna Heinz was determined to not be under the influence or in possession oaf any contraband and was released.