A swearing in ceremony was conducted at the Rood Center today for new hires and promotions within the Nevada County Sheriff’s Office.  Sheriff Keith Royal says the department is now able to fill some much needed  positions.
Click here to listen to Sheriff Keith Royal

And with her family present to watch, Sgt. Alicia Milhous was promoted to Lieutenant… just the s 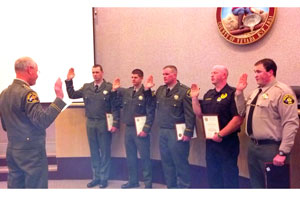 econd woman to achieve that rank in the Nevada County Sheriff’s Department. A path that was blazed by Sheriff’s Captain Shannon Moon .
Click here to listen to Lt. Alicia Milhous

–Also being sworn in as Correctional officers : Darrick Cossairt , and Tucker Raggio.

Sheriffs Deputy Steven Stanley and Dispatcher Lauren Eason couldn’t attend the swearing in ceremony today and will be recognized at a later ceremony.