A Grass Valley teenager who was in critical condition after a car accident on Auburn Road, Sunday afternoon, died at the hospital . 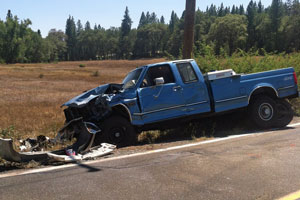 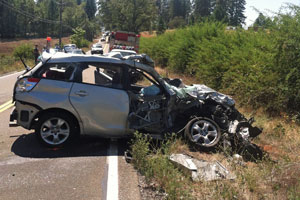 The both drivers were taken to Sutter Roseville Hospital by helicopter. The driver of the Matrix received  broken legs an arm and sever facial injures. The accident remains under investigation. The CHP was notified Monday morning that 18 year old Colin Dickey died from his injures.

My family and I drive Old Auburn Road almost every day and we have noticed many aggressive drivers for years on this rural road. Tailgaters, speeders and people illegally passing are the norm on this road.
Slow down people, get off my tail, I WILL go the speed limit and get to my destination safely...unless YOU are putting me and my families' life in danger by YOUR aggressive driving habits!
So sorry that a young person has died and another is inured because of unsafe driving.

Collin Dickey was fine young man who was distracted and died for it. He was part of our extended family and we are heartbroken. So rather than complain think if this could be someone you know and feel sorrow, not anger.

I am so deeply sorry for the loss of Colin. I did not know him but I lost my little brother soon after graduating in a very similar situation. To the family I hope you know you are not alone in your sadness and I am thinking of all of you. My deepest condolences to you.

Our prayers for peace and healing go out to Colin's family. He was always well-mannered, polite, friendly, good natured, and fun to have around. Rest in Peace - you will be remembered and missed by Connie, Marianne, Michael, Matthew, Brent, Victor, Brandon, Ellie, and the rest of our group of friends as well as many others, we are sure.

I met Collin for the first time one week ago on Sunday, August 11, 2013, at approximately 1:30 p.m. on Old Auburn Road. When I ran to his mangled car he was unconscious and not breathing. The doors were jammed shut from the force of the collision. I felt his heart beating. He was alive! I was able to get his airway clear and he began to take rhythmic breaths until paramedics arrived and we loaded him onto the backboard and into the ambulance. I had great hope that he would survive. The helicopter was there. Surely he would make it, I thought. The news of his death the next day brought much grief that I was not prepared for.

How can someone I had never met before affect me as deeply as Collin has? Just a few moments with him while he lay unconscious and now I cannot get away from the incredible heaviness I feel for him and those who knew him.

I would like to know Collin Dickey. Thank you, Connie and Deb for sharing a little about him. It helps me reconcile the strong emotions of sorrow and grief. If anyone else would share more I would be very grateful.

Rick, we are having a celebration of life for Collin and would love for you to come out and meet his family and friends!!!We would love to hug the man that, out of the kindness of your heart, tried to help our friend in need. Sept 28 at 1 pm at the Biblical Gardens and look around for Kelly as I would love to personally meet you, as would my son xoxo