The California Single Payer Bill, SB 562, passed the California Senate Health Committee on Wednesday, April 26th. with a majority vote. Thousands of supporters held a spirited rally at the Sacramento Convention Center, followed by a colorful march to the State Capitol for the Senate Health Committee hearing. Nevada County was well represented thanks to the coordinated efforts of the local Democratic Central Committee and local “Single Payer Activists” like Mindy Oberne and Pinky Zalkin

There are a lot of people in Nevada County that support the single payer concept as was demonstrated at the Congressman Doug LaMalfa town hall last month. Local residents organized a bus while others got there however they could.

There was not enough space available in the hearing room to accomodate the people who showed up in either support or opposition to this bill, so the Sacramento Convention Center had Jumbotrons set up for everyone to see and hear the proceedings. there was plenty of testimony presented to the Senate Committee. Michael Lighty, on staff at the California Nurses Association, was one who presented before the senators.

There is concern among providers of health care that having a single payer might adversely effect how fees for services would be determined. Jennifer Holm, a registered nurse from Santa Cruz County joined with the Nevada County group to observe the hearings.
click to listen to Jennifer Holm

KNCO will continue to follow the progress of this bill and remember that on May 16 th. at the Nevada Theater from 6 to 8 PM there will be a Town Hall Meeting concerning this Bill. 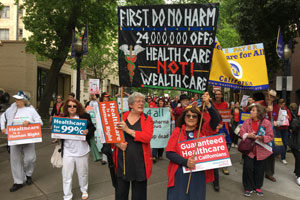