The Roger Project-Helping a Local Veteran

A housebound veteran who spent 20 years in service including multiple tours of combat in Vietnam has a new lease on life, thanks to some local people who care and a Grant Program for Veterans offered by Home Depot. Will Buck is a member of the Nevada County All Veterans Stand Down Board and says they were made aware of Roger Wirtz’ situation from a volunteer with Meals on Wheels .

Roger Wirtz had basically become trapped in his own home as his house was not equipped with ramps, and secondly his electric wheelchair was broken. That’s when Chaplain Dennis Fruzza heard of a program through Home Depot.

A $5,000 grant was awarded to what became known as the Roger Project. A crew from Home depot constructed two new ramps and replace one door to Roger’s Mobile home. The Stand Down committee was reaching out to others veterans organizations to find a wheelchair but it turns out they didn’t have to look very far. Bill of Wiley’s Wheels had already heard about their need.

Roger now has his new powered wheelchair donated by Wiley’s wheels and picked up and delivered by the American Legion Post 130 Riders.
Roger is also receiving a second grant from Home Depot to replace the flooring in his home and replace his appliances with more energy efficient ones. That project got underway last Thursday morning.
——- 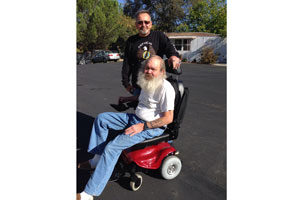