Three suspects were taken into custody on various drug related offenses after the vehicle they were driving was stopped for a lighting violation. According to Grass Valley Sgt Steve Johnson says that the officer noticed the occupants of the vehicle were behaving suspiciously.

All three were given an evaluation and were determined to be under the influence. One of the passengers, Maria McCown, allegedly admitted drug use.
Click here to listen to Sgt Johnson

Upon searching the vehicle additional drugs were located in the trunk of the vehicle.
Click here to listen to Sgt Johnson

It was also learned that the drugs were purchased in Sacramento and then transported to Nevada County to be sold. 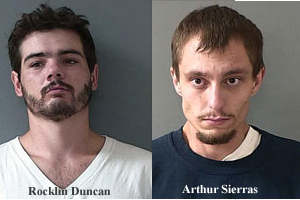 Rocklin Duncan, Maia McCown, and Arthur Sierras were taken into custody for possession, transportation, and sales of drugs as well as conspiracy. Duncan was also charged with committing a felony while on bail.