Helicopter 514 arrived at White Cloud on Friday, June 1 and is available for firefighting needs announced Tahoe National Forest Fire Chief Jeanne Pincha-Tulley.    According to Pincha-Tulley, “The helicopter and crew are an integral part of both the Forest Service and CalFire’s arsenal of rapid fire emergency response.” 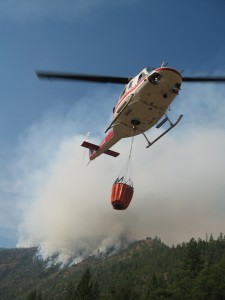 514 is a medium size helicopter, a Bell 212, which can carry water, firefighting supplies and a crew of 8.  This helicopter has been used for fires in Penn Valley, Lake Wildwood, Lake of the Pines, Placerville, Camptonville, Auburn, Dobbins, Oroville, and Lincoln as well as in the wildland of the National Forest.  It is especially useful in these areas due to its ability to drop water in sensitive confined spaces like subdivisions and rural developments or in critical areas of the TNF.   It also can get its crew into remote locations not easily accessed by other crews or equipment.  Currently the helicopter, support vehicles and crew of 15 firefighters are stationed at White Cloud, the Forest Service compound on Highway 20.