A man with a lighting problem on his car is now in jail. Nevada County Under Sheriff Joe Salivar says a deputy saw a car driven by 56 year old Keith Christopherson of Grass Valley on Alta Vista Drive off of Ridge Rd. early Tuesday morning. The deputy saw the car had a lighting problem and he was going to advise the driver. When the Deputy stopped the vehicle he saw a partially consumed bottle of an alcoholic beverage. The man was asked to preform a field soberiety test, which he quickly failed.  Christopherson  informed the Deputy his license was suspended for a prior drunk driving.   The Under Sheriff says when Christopherson was 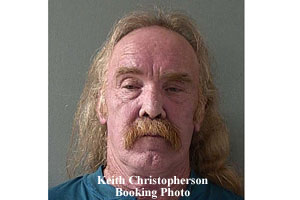 taken into custody his car was searched.

Christopherson was taken into custody for suspicion of driving under the influence, driving on a suspended license, and possession of dangerous drugs.