A Nevada County Sheriff’s Deputy on patrol in North San Juan stopped a vehicle around 7 o’clock last night because the vehicle had no front license plate and no current registration. Nevada County Sheriff Keith Royal says the officer made the stop at Tyler Foote and Grizzly Hill Roads… 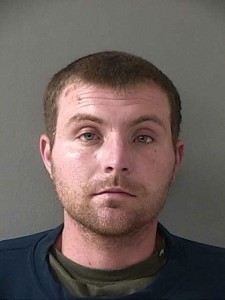 The officer then told Eastman to step out of the vehicle and asked if he had any contraband or weapons, at which point Royal Eastman became aloof and started moving around the vehicle, away from the officer…

At that point Eastman took off running and turned into the yard of a residence nearby…As the officer is chasing him he observed Eastman drop something. Sheriff Royal says the officer keeps up the foot persuit and eventually has to use his mace to get Eastman under control.

Eastman also had digital scales and small baggies to package drugs for sales, also a small quantity of heroin and methamphetamine. As a result Eastman went to jail for a variety of drug charges, possession of the firearm and other weapons charges.