A man stopped for speeding on Interstate 80 in Truckee around 8 o’clock last evening found out a traffic ticket was the least of his troubles. CHP Officer McDonnell says when he approached the car he saw a methamphetamine smoking pipe in plane view, and the driver, 34 year old Timothy Ferguson was unable to produce a drivers license.

At that point Ferguson was taken out of the car and placed under arrest, and an inventory was taken of items in the car. A large quantity of identiy theft tools were located including laptops, embossers, credit card readers, and multiple forged checks and credit cards. At that point Officer McDonnell called for backup.

O’Donnell says there were mass quantities of people’s paperwork in the car. He also had multiple identification cards in the car with his picture on them with different names and addresses. Ferguson was booked into the Nevada County Jail on charges of Possession of a controlled substance and parphernalia, Carrying a concerned firearm,and being a fugitive from justice on the outstanding warrants. Officer McDonnell says additional charges of identity theft and fraud are expected to be added once the investigation is completed. 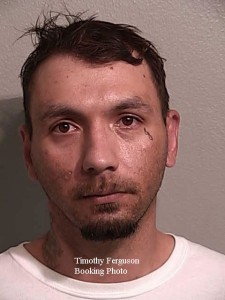