County Supervisors today decided it makes more sense to improve the McCourtney Road Transfer Station at a cost of $6 to $15 million dollars, rather than spend up to  $24 Million dollars building a new one.

Last year the county entered into a franchise agreement with Waste Management to provide collection services, recycling, and transfer station operations.  As part of the agreement, Waste Management conducted a relocation study to explore the viability of either relocating the McCourtney road Transfer Station to another location or upgrading the existing facility.   They looked at six sites considered viable based on size, zoning, and proximity to major roads, but none of the sites were available for purchase. 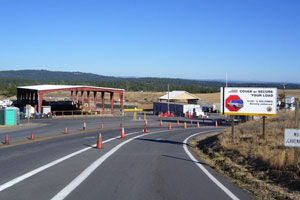 Nevada County Director of Public works, Steve Castleberry says driving the need for improvements to a transfer station  is that the county must attain a 75 percent Diversion Rate by the year 2020,  meaning three quarters of the waste must be in recyclables.  Supervisor Scofield asked Castleberry if the recycling center on Loma Rica Road  would be consolidated with the McCourtney road Transfer station?

Green Waste Chipping is also proposed on site to limit the number of truck trips.  One of the bigger things is the addition of scales. Right now there’s one scale in and one scale out and there are 110,000 users to McCourtney Road Transfer Station a year.  Waste Management is proposing two scales in and one scale out.