A transient who came really close to setting an apartment complex on fire has been arrested by Grass Valley Police.

Grass Valley Police Lt. Steve Johnson says Officers located 45 year old james Steward in a patio area. He was extremely intoxicated and it looked like he had spent the night there.

click to listen to Lt. Johnson
It’s believed Steward used those papers to start the fire.

click to listen to Lt. Johnson
The patio area was also surrounded by thick bushes, pine needles sticks, twigs and there were some large cedar trees next to it. it was pretty apparent that if the fire had gotten out of control it could have been s disaster. All of the Apartment units were occupied. Steward was arrested on a fellony charge of causing fire of an inhabited structure and taken to the Wayne Brown Correctional Facility. Bail was set at $25,000. 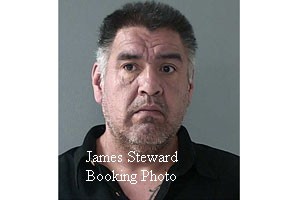