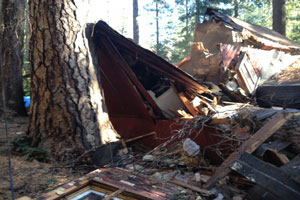 The 900 square foot house looked like a doll house after the tree fell through the structure. The contents of individual rooms could be seen on either side of the split and firefighters were cutting the tree and rubble as they attempted to locate a heat source that was causing smoke. 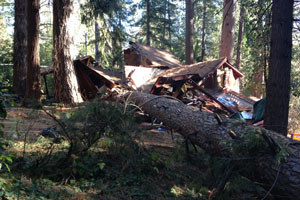 A couple and three children lived in the structure, but fortunately no one was home when the tree fell.
The female resident of the house noticed the over-100 foot tall pine tree leaning towards the house this morning when she left the house.
Click here to listen to the Woman Resident

McMahon says that firefighters will remain on site until they can declare there fire is out, but the structure is a total loss.
Click here to listen to Deputy Fire Marshall Terry McMahon

On a positive note, Fire Chief Jarod Johnson had hope for the cat saying that based on his 30 years experience he is most certain the cat will show up.