The Truckee Police Department has arrested the suspect in a shooting death that occurred in Idaho Falls, ID in the early morning hours of New Year’s Day.

At approximately 4:50pm on January 1st, 2015, Truckee Police Officers took 26-year-old Kevin Michael McQuilliams into custody after an officer observed the suspect vehicle in the area of Dorchester Drive and Rolands Way in the Glenshire Subdivision of Truckee, CA.

According to previously released information, McQuilliams is believed to have been involved in the shooting death of his 34 year old girlfriend and was wanted by the Idaho Falls Police Department.  Police across several states were on the lookout after information about the investigation was disseminated through official channels.  Police in Idaho were first alerted to the crime, when neighbors reported hearing gunshots at the home on South Emerson in Idaho Falls, ID, at approximately 1:15am.

Truckee Police Officers were monitoring the I-80 corridor when a vehicle matching the description exited the Hirschdale off-ramp from westbound I-80.  The suspect vehicle proceeded into the Glenshire subdivision and was ultimately stopped in the area of Dorchester Dr. and Rolands Wy.  Officers conducted a high-risk traffic stop on the vehicle and were able to take McQuilliams into custody without incident.

“I am very proud of our Officers observations and actions that led to this arrest.  We are also very pleased we were able to get such a dangerous suspect in custody without anyone else being hurt” said Captain Rob Leftwich with the Truckee Police Department.  “Truckee is an exceptionally safe Town but with a major interstate in our jurisdiction and metropolitan areas fairly close by, we have to remain prepared for these types of incidents.  This is a perfect example of great police work and interstate law enforcement communication that allowed for a quick arrest” Captain Leftwich said.

It appears McQuilliams has no connection to Truckee.  McQuilliams was booked into the Truckee Jail for charges related to the homicide from Idaho. 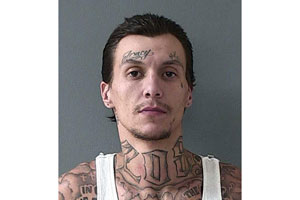