A Grass Valley household has some stolen property back, thanks to the Sheriff’s Department. Some items were taken from a home in the 10-thousand block of Dawkins Lane around 4pm  Sunday. The residents noticed a woman standing lookout, and then get into a blue Izusu with a male suspect. Nevada County Sheriff Keith Royal says a deputy found the vehicle in the K-Mart parking lot with the male suspect.
Click here to listen to Sheriff Keith Royal 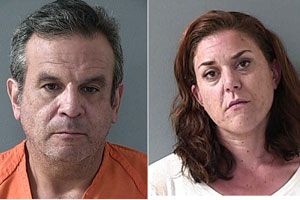 The female suspect, 34 year-old Melissa Robertson, originally provided a false name to deputies, and was also arrested. Royal says before the arrest, deputies spotted the blue Isuzu on the road.
Click here to listen to Sheriff Keith Royal

Both Roberts and Robertson were booked into the Wayne Brown Correctional Facility.