Two women arrested following a DUI related collision in Grass Valley Monday night. According to CHP Officer Greg Tassone, the incident began with a call a little before 10:00 PM of an overturned vehicle at the Empire St/Highway 20 Off-ramp on Northbound 49. Apparently two vehicles were involved. A Subaru with four occupants was half way up the exit when a Silverado pickup truck also exited and approached at a high rate of speed eventually ramming the Subaru and pushing it forward.  The Silverado then flipping on its side and sliding into the embankment.
Some off-duty medical emergency personnel stopped to assist and were trying to render some medical attention. However, the driver of the Silverado had other plans. 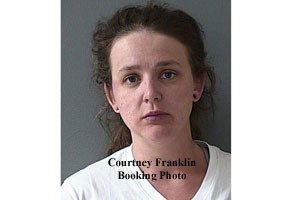 That tactic dd not turn out the way the driver, 27 year old Courtney Franklin, had planned.

Then as the Silverado was being up-righted and prepared for towing an additional discovery was made. An unregistered, loaded Glock handgun was found concealed in the driver area of the cab.

As a result of the injuries cause to the occupants of the Subaru, Courtney Franklin was arrested for DUI causing injury, possession of a concealed, loaded firearm and driving without a California Driving license. Franklin’s friend, Vanessa Logan, was arrested for DUI.