Two men have been arrested, and two more are still being sought, in a burglary case involving hundreds of items. Sheriff’s Lieutenant Bill Smethers, with the Nevada County Narcotics Task Force, says the items were taken from a home on Wolf Mountain Road. He says detectives first went to a home on Alpha Street in Grass Valley, where the homeowner told them that he’d been renting rooms to two men….

Smethers says the two renters were also on probation, with search terms….

Smethers says that included a lot of antiques. Those two men are still at large. But they have arrested Travis Warhurst and Shea Penkala on felony charges of possession of stolen items. Warhurst also faces a number of misdemeanor drug-related charges, including possession of methamphetamine. It’s also his fourth arrest in the last two years, with some of those charges also related to burglary and drugs. 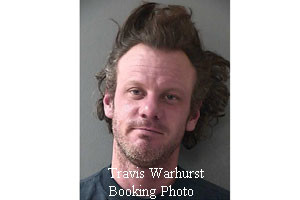