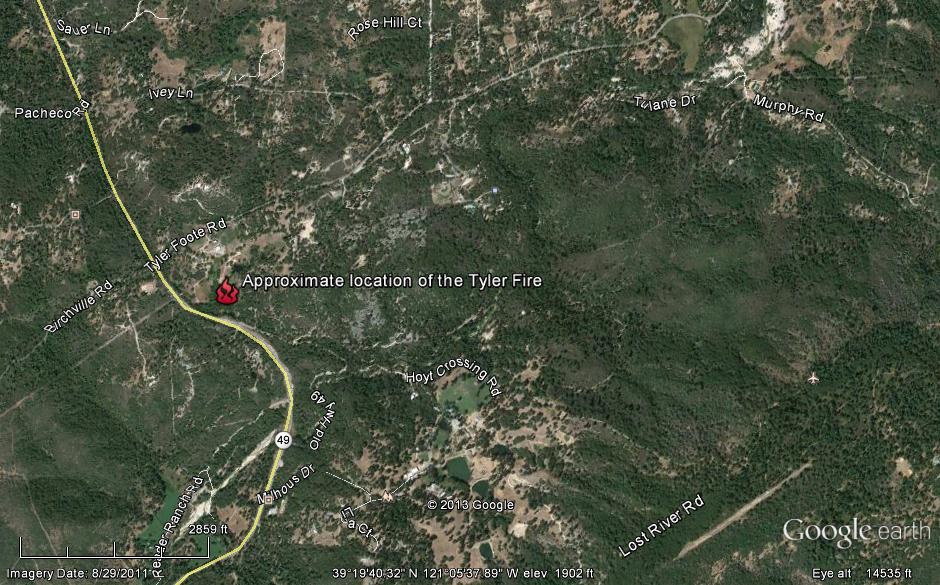 The cause of the fire is under investigation, however several spots along Hwy 49 were initially reported. CHP is providing traffic control on Hwy 49.

Tanker 89 is being released, returning to Grass Valley.

Just got confirmation that one home on Ivey Lane was destroyed. The fire is holding at 40-45 acres and firefighters continue to make good progress.August 31, 2013 at 5:19 PM

Firefighters have a handle on the spotting issue and forward progress has been stopped.August 31, 2013 at 4:41 PM

Some resources are being released from the fire. Good progress reported.

Current wind conditions: SW 8 mph Gusts up to 17 mph. Some tree torching observed, but progress is being made.

An additional order for a dozer has been placed. Two strike teams, one from Butte County and one from the Amador-ElDorado Cal Fire unit are on their way to the fire.

The fire is still only on the west side of Ivey lane. Active structure protection for 5 structures on Ivey Lane, with engines next to the structures and firefighters standing by (clearing flammables etc)

Road closures: State Parks has closed Hwy 49 at Tyler and 49 // NCSO has it closed 49 at Penn Valley Rd. – aka Petersons Corner

Tankers are dropping retardant to slow the progress of the fire while helicopter and ground crews are providing structure protection. All tankers are on “load and return,” meaning as soon as the tanker is empty, they return to the Grass Valley Air Base, reload and refuel if necessary and come out to the fire immediately.

Additional tankers and engines for structure protection have been requested. Significant spotting is being reported.

Pot plants used as landmarks.... Only in Nevada county.