SACRAMENTO – The U.S. Attorney here representing the U.S. government has unexpectedly and belatedly dismissed all charges against all 16 anti-drone demonstrators, who had been ordered to appear in Federal Court here to be arraigned Tuesday, September 9.

The demonstrators included military veterans and members of the clergy, who were among the 31 people arrested last March and April for trespassing onto Beale Air Force Base in four separate nonviolent actions to protest the use of unmanned drone aircraft which are killing unarmed civilians, including children, around the world.

Beale AFB, located just outside Marysville, CA, is home to the Global Hawk Drone, a surveillance drone that assists in finding targets for armed Predator and Reaper drones. Anti-drone demonstrators have kept up a sustained a presence at Beale for the past three years, calling for peace and drawing attention to civilian deaths and the illegality of the US drone warfare program.

Some of those whose charges have been dismissed were arrested at Beale’s front gate on April 18 following a Good Friday prayer service that was attended by more than 50 people. Eleven demonstrators attempted to deliver a letter to Beale’s commander, along with the World Council of Churches’ Statement on the Use of Drones and the Right to Life and “A Call from the Faith Based Community to Stop Drone Killings,” signed by religious leaders from around the country.

Other demonstrators had participated in a Veterans Unite against Drones action at Beale on April 29. Thirteen demonstrators, including six veterans, temporarily blocked traffic at the two busiest gates entering Beale. They were arrested after reading and trying to deliver an indictment charging President Obama, the Beale base commander, drone pilots and others with “crimes against peace and crimes against humanity.” Among the veterans arrested were Barry Binks, John Reiger and Cres Vellucci of Veterans for Peace of Sacramento; Richard Gilchrist, Michael Kerr from Bay Point/Pittsburg, Ted Sexauer. Other arrestees included Fred Bialy from the Bay Area, Bev Fitzpatrick from Fresno, Catherine Hourcade from Stockton, Shirley Osgood, Devan Phenix and Pamela Osgood from Grass Valley and Cathy Webster. In addition to these arrests, five protesters were arrested on March 5 and two were arrested on April 1.

Although those arrested are supposed to be notified with 2-3 weeks of a court date, the Beale protesters heard nothing until August (nearly six months after the March arrests), when 16 of them were summoned to appear for arraignment. Less than a week before court, all charges were dismissed. No explanation was given. However, the National Lawyers Guild of Sacramento had already recruited a defense team of some of the most prominent defense lawyers to help represent the veterans, clergy and other defendants.
In the midst of the confusion about whether charges would be filed, Occupy Beale activists have continued regular, ongoing demonstrations at Beale. This month, on September 29 and 30, demonstrators plan to again engage in nonviolent action at Beale, as one of over 160 actions coordinated with Campaign Nonviolence to highlight the links between war, poverty, and climate change.

Other federal trials this year involving anti-drone defendants at Beale have resulted in a handful of convictions and one “not guilty” verdict. The government has refused to allow jury trials of the demonstrators.

To find out more about past actions and to stay updated about upcoming demonstrations, go to the Occupy Beale Air Force Base Facebook page or Occupy BealeAFB website. 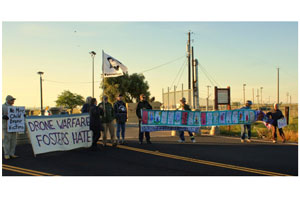 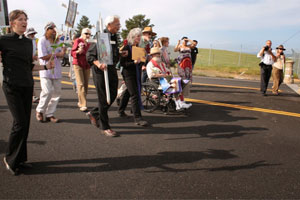