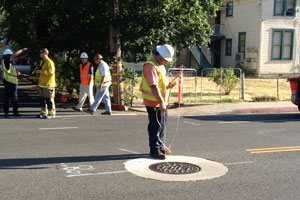 With no smoke or flame visible, fire personnel took a precautionary role as Grass Valley Public Works attempted to locate the issue which could possibly be related to construction work in the area.

According to Chief Funk, initial air monitoring showed no unsafe levels of gas in the system.

Colfax Avenue was closed for several hours from the bowling alley to the turn at the softball fields while the system was checked and cleared. The cause had yet to be determined at 7:45 PM.