The Nevada County Board of Supervisors at their meeting today gave their unanimous support for a resolution to urge state officials  to  restore the Covered Bridge at Bridgeport, which has been closed to the public since 2011. The draft resolution sponsored by Board Chair Hank Weston directs County staff to communicate to the Governor, State legislators, and State Parks staff the importance of renovating the bridge quickly in order to prevent further deterioration or a catastrophic collapse.
Click here to listen to Hank Weston 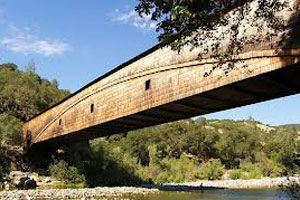 Built in 1862, the 229-foot Bridgeport covered Bridge at the South Yuba River State Park is the longest, single-span wooden covered bridge still in existence in the United States, and is a National and State historic landmark.  An engineering survey in 2011 revealed severe structural problems and the bridge was closed.

The State has budgeted $220 thousand for the stabilization effort for the bridge. Once the covered bridge is stabilized, the next step will be restoration and rehabilitation at approximately $1.1 million. State Parks has secured a $545, thousand federal grant with local fundraising   efforts working to raise a required $62,000 in matching funds.  However nearly $600,000 dollars is still needed to fully restore and reopen the Bridgeport Covered Bridge. Weston asked Mike Brown with the California State Parks Development and acquisition department if it can be done.
Click here to listen to Hank Weston

The Resolution  urges   the  Bridge Renovation Project   be funded in the 2014/15 State Budget and   Project   completion by April 2015; a timeline  which was supported by SYRCL Executive Director Caleb Dardick.
Click here to listen to Caleb Dardick

The  Park reports that the Bridgeport covered Bridge draws approximately 500,000 visitors annually to this region. Supervisors mused that If each one contributed just one dollar they could be close to their goal.