If you noticed law enforcement units in a pursuit around 10 o’clock this morning between Penn Valley and Bittney Springs Road, they were after a suspect in a stolen vehicle. Nevada County Sheriff’s Lt. Bill Smethers says the car was originally stolen out of Grass Valley  and was spotted by an unmarked Sheriff’s unit on Retrac Road off of Indian Springs this morning.
click to listen to Lt. Bill Smethers
The suspect vehicle continued on Indian Springs Rd.  into the Penn Valley Area and eventually onto Highway 20 going eastbound.

click to listen to Lt. Bill Smethers
At the Intersection of Bittney Springs Rd. and Rough And Ready Highway the driver turned onto Bittney Springs and wound up wrecking the vehicle on the first curve. The Individual foot bailed and there was a short pursuit and Lt. Smethers says the suspect, 20 year old Dakota Scarborough was taken into custody.

click to listen to Lt. Bill Smethers
Also in the vehicle were two air soft guns and a 22. caliber hand gun. Scarborough was taken to the hospital for treatment and when released will be booked into jail on a variety of charges. Lt. Smethers also says the stolen vehicle, a Ford Focus appeared to be initially white in color but had been spray painted black. 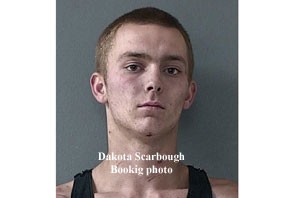