Either a broken turn signal or a failure to use the signal correctly led to traffic stop and then a far more serious arrest. Nevada County Sheriff Keith Royal says one of his deputies stopped a car and made contact with the driver, 28 year old Reno resident Jaqueline Muehsam. While speaking with Muehsam the deputy noticed a large marijuana plant in a pot in the backseat. Muehsam admitted the plant had been given to her by a friend and she did not have a recommendation. She also told the deputy that everything else in the car was hers except for a dark blue duffel bag. At that point the deputies had Muehsam get out of the car and searched the vehicle. In the glove box were two notebooks. 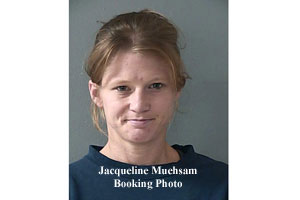 The bag also contained a variety of prescription medicines. Muehsam also had some marijuana in her purse as well as $4500 cash.
Then while booking Muesham into the jail an additional discovery was made.

Jaqueline Muehsam was booked on a variety of drug related charges.