Having a cell phone but actually being able to use it in Alta Sierra is a sketchy proposition. That is about to change as the Nevada County Zoning Administrator on Wednesday approved a permit for Verizon to put up a new Cell Phone tower.

Alan Heine is the project manager for the new cell phone tower to be built on a site approximately one half mile south of the Dog Bar/LaBarr Meadows intersection. He says it will be constructed to look like a mono pine tree and blend in with the other trees in the area. It should be almost invisible.

What they will notice is a dramtic improvement in connectivity because the tower will be high enough to be on top of the undulating terrain of Alta Sierra. Heine says construction could begin within 90 days.

The area that will see improved service in Alta Sierra will extend from east of Dog Bar Road and West to Highway 49. While Verizon is constructing the tower, they will make room for two more cell carriers to also use it. 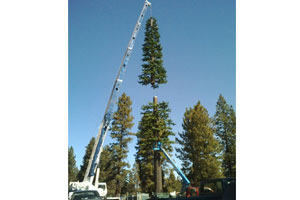