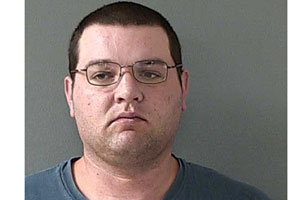 says Foote is accused of continuous  sexual  assault of several victims, at least two of them  children while he was employed at a group youth facility in 2002.  Foote is also accused of molesting another youth continuously from 2003 until 2011.   Newell  says there is concern that Foote  may have sexually molested other children as well,  and the District Attorney  wants those victims to feel safe in coming forward.
click to hear Cliff Newell

If you have any information that may relate to the case please notify District Attorney Investigator Tom Swisher at (530) 265-1796 or Detective Dominic LaFountain of  the Major Crimes Unit of  Nevada County Sheriff’s Office at (530) 470-2716.

click to hear Cliff Newell
Thus far 29 counts of sexual assault against three persons are alleged in the  complaint filed by the District Attorney’s Office on February 8th and Newell says   an Amended Complainant will be filed with additional counts and victims.   Foote is being held on           $5 million  bail and is scheduled  to enter a plea on March 28th.