When the United States Military was  fighting the communists in Vietnam, they found an ally  in the mountain tribes people of the Central Highlands of Vietnam. They were called  the  Montagnard (mountain yard) which is a French word meaning mountain people.   The Montagnard had little love for the communist Vietnamese and were more than willing to help the Americans fight against them. Joe Sanders is a Vietnam Veteran now living in Nevada County. In the army signal corps he supported the 4th Infrantry Division in the Central Mountains where the mountain people were. 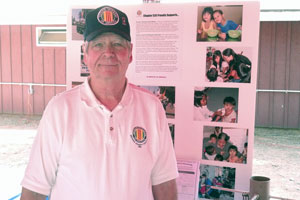 click here to listen to Joe Sanders
In the years since the Vietnam War the Montagnard were persecuted by the communist government to the point where they could no longer take care of their children. The Vietnam Veterans of America, in gratitude for their service in the war, built and continue to support an orphanage for the  Montagnard children, and now the grandchildren of those who helped them fight the North Vietnamese.
click here to listen to Joe Sanders
About 800  Montagnard  children are cared for in the orphange. Sanders says each year some of the Vietnam Veterans take a trip to southeast Asia and he was able to visit the orphanage in 2009. He says the Vietnam Veterans are also constantly fundraising to support the Montagnard orphanage.