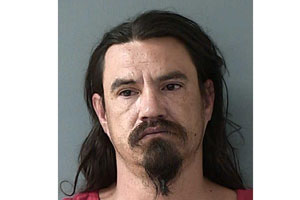 While being taken into custody 40 year old Robert Johnson of Nevada City repeatedly threatened to kill one of the investigators if he ever saw him in the future. Sergeant Selleck says one of the charges against Johnson was possession of a chain with a lock on the end, only made for swinging at people.  Johnson’s  bail was set at a  $250,000.  Three other people were taken into custody on misdemeanor charges and warrants for their arrest.