A weekend fire drill for area firefighters to sharpen their wildland firefighting and protection skills ended up being a real drill for some of the firefighters as they were called off to cover a fire that broke out in Shasta County Saturday. The Drill had been set up at the Old Bohemian Mill Site on Brunswick Road. Nevada County Consolidated Fire Captain Kevin Menet  says the US Forest Service and some incident commanders left for the fire which meant they had to change things around a little and have some new instructors step in to do the training.

As the firefighters are doing their training, Captain Menet  says local residents also need to be getting their property ready for fire season.

The Saddle fire in the Shasta-Trinity Forest was listed at 15-hundred acres in size and 45 percent contained as of today. It’s located seven miles northwest of the community of Hyampom.  All mandatory evacuation orders have been lifted. 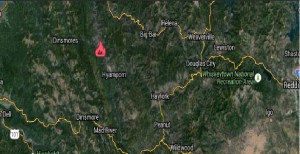