The South Yuba Canal is owned and operated by the Pacific Gas and Electric Company.  PG&E helicopter patrols were under way on Saturday (Nov. 23) to determine the extent of the damage and plan emergency repairs.The canal is one of the main supplies for Nevada Irrigation District water users in western Nevada County.  NID crews were at work Saturday, rerouting water supplies from other sources and notifying affected customers.

NID Water Operations Manager Chip Close said a limited number of canal water customers are affected by the outage but that no immediate impacts are expected for users of piped, treated water.  All customers are encouraged to conserve water during the repairs, which could take several weeks, Close said.

Close said damage to the South Yuba Canal appears to be widespread, with numerous large trees falling into and over the canal, breaking and collapsing flumes.

“We’ve had damage from big snow storms but as far as I know, we haven’t ever seen wind damage like this,” he said.  The damage occurred in several sections of the 19-mile waterway which extends from Lake Spaulding to the Scotts Flat Lake area.

Close said NID is in contact with small numbers of canal water customers on the Cascade and Chicago Park canals whose supplies are affected by the outage.  He said the district is working on multiple options to replenish customer storage tanks in certain areas.

Meanwhile, NID is pumping water from the lower elevation DS Canal, which flows from Lower Scotts Flat Reservoir, up to  levels where it can reach areas affected by the outage.  The addition of specialized high-pressure pumps is also being planned, Close said.

The high winds also knocked out the 60-kilovolt power line running from NID’s Bowman Powerhouse, where power production has been suspended.  The location and cause of the power line damage have not been determined.

PG&E and NID are placing high priority on the water system repairs because of the South Yuba Canal’s critical importance to the western Nevada County public water supply.

NID plans to post updates on the repair effort on its website.  For information, see the Irrigation Water Outages link at www.nidwater.com. 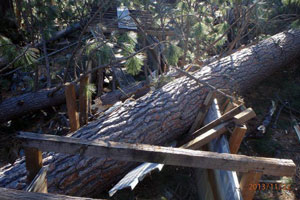 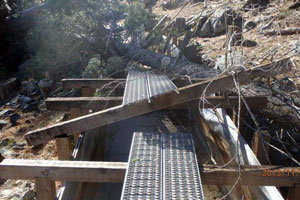 NID is considering taking over the responsibility for the repair and maintenance of the South Yuba Canal as part of its negotiations with PG&E and the relicensing of the Yuba Bear Project. This 19 mile long canal, in extremely steep and inaccessible terrain, has always been a catastrophe waiting to happen.
One of the last times that trees destroyed some of its numerous flumes was in the late Nineties when the winds came after it had snowed heavily. PG&E General Construction crews responded with boom trucks and helicopters. It took weeks to repair, but like now there was time because it was winter.
Some hot summer day when water demands are great, a fire will go through that area with devastating effect on this facility. If NID takes it over, I hope that they have the men and equipment to replace what is our community's main source of water. Otherwise, there will be hell to pay!