The California Highway Patrol was notified Wednesday afternoon that a vehicle had just been stolen from the Rough and Ready Area.

The CHP attempted to make a traffic stop, but the Prius was traveling at 95 miles per hour towards Brunswick.

By then Grass Valey Police, Nevada County Sheriff’s and the CHP helicopter were also involved in the persuit.

Eventually the prius went through the roundabout at Idaho Maryland Road and made an evasive maneuver.

The suspect, 28 year old Jessica Oaks,  was apprehended nearby with an open container of Peach vodka. She was booked into county jail on charges including multiple forms of DUI Driving on a suspended license, Reckless evading a peace officer, Vehicle theft and Resisting arrest. 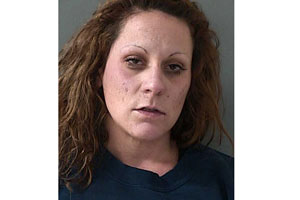 I just want to apologize to the community for doing this and putting people in danger. By the grace of God no one got hurt. I'm clean and sober now and in adult drug court in Nevada County. I'm finally making something of my life now and I look back and don't even know who that girl was!! I'm starting to be of service and giving back to the community and my local church(word of live)
Again my apologies to every one. I will keep moving forward from here to be a productive member in society. Thank you~Jessica Oakes