The former president of the Del Oro Junior Golden Eagles turned herself in at the Placer County Jail this morning, on charges that she embezzled more than $20,000 from the youth football and cheer program during her 2013 term.

Clara Corine Dillard, 35, of Rocklin, used the pilfered funds to take trips to Disneyland, Oregon, Washington and to the Bay Area. She also used the money to pay her phone bills, car payments, and other personal expenses. The case came to light when a former board member of the organization received an overdraft notice from the bank. An extensive audit of the account was performed by a Placer County Sheriff’s detective, who confirmed the embezzlement. Dillard agreed to turn herself in. 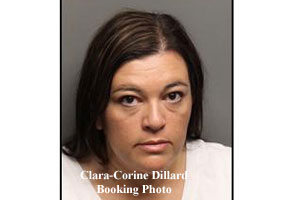