The breakup of a couple went horroribly wrong. Nevada County Under Sheriff Joe Salavar says Deputies were called to a home on Greenhorn Road Tuesday evening. The victim and 28 year old Ashley Johnson of Marysville were ending their relationship, with Johnson packing her car. The victim said Johnson was taking several items belonging to him, so he crawled into the trunk to retrieve his property. 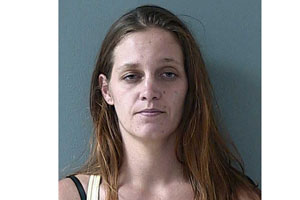 Johnson then got out of her car and repeatedly hit the victim in the head, until he got out of the trunk. She then threw a battery charger at him, then took a large rock and broke the windshield of his truck. Johnson was taken into custody for suspicion of domestic violence and vandalism.