A woman complained to Nevada County Sheriff about an employee that allegedly had been stealing from the business. Sheriff Keith Royal says the victim came into the office stating that 33 year old Jeanne Schreib had been forging checks to herself. It all started when the victim was contacted by Rite Aid Pharmacy that her prescription was ready. However, the victim had not ordered any prescriptions or even been to the doctor. The victim investigated further because she knew that Schreib had substance abuse issues in the past.
Click here to listen to Sheriff Keith Royal 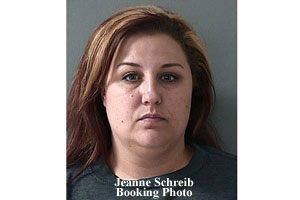 The victim calculated that $18,000 worth of checks were cashed going all the way back to December. Nevada County Sheriff’s deputies could not locate Schreib at her residence and apparently Schreib caught wind of the investigation and told her husband that she was self-surrendering to the Wayne Brown Correctional Facility. However, she never did turn herself in and was eventually located by Placer County deputies and transferred to the custody of Nevada County Sheriff’s deputies. Schreib shared information with the deputies as she was being booked.
Click here to listen to Sheriff Keith Royal

Shreib remains in custody at the Wayne Brown Correctional Facility.