A female theft suspect assaulted store employees when she was confronted. Grass Valley Police Captain Rex Marks says 40 year old Jeanette Tieber of Meadow Vista went into Raley’s on Freeman Lane Monday afternoon and attempted to purchase several items and a gift card with her debit card. Captain Marks says when the debit card was denied, Tieber fled the Raley’s store with the items. The Captain says when the woman was confronted she lashed out at the store manager. 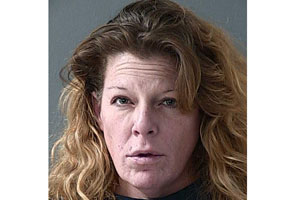