In a case of what appears to be the wrong person in the right place at the wrong time, a subject ended up arrested while out for a stroll with her boyfriend. On Monday afternoon Grass Valley police responded to a report of a verbal argument that was escalating as a result of road rage incident  in the area of Bennett and Ophir Street. Sgt Joe Matteoni says that officers made contact with several individuals when they arrived, but none were involved with the confrontation.
Click here to listen to Sgt Joe Matteoni 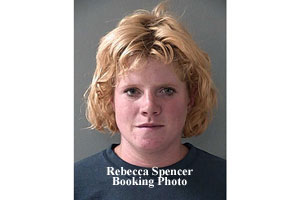 Rebecca Spencer was taken into custody for the warrant and transported to the Wayne Brown Correctional Facility.

The suspect for a Grass Valley burglary on December 18 ended 2013 in custody. The original burglary took place at a Ridge Road residence where the victim suspected that a family member was responsible for the theft of a number of items. According to Grass Valley Police Sgt Joe Matteoni the victim gave a name and potential location of the suspect.*
Click here to listen to Sgt Joe Matteoni

Johannsen was able to evade law enforcement until he was spotted by a Grass Valley police officer on Tuesday.
Click here to listen to Sgt Joe Matteoni

Geoff Johannsen was charged with burglary, possession of stolen property, and the outstanding warrant for a separate incident.