SYRCL, the South Yuba River Citizen’s League has been working for years to improve fish habitat for wild salmon and steelhead who are listed as threatened with extinction under the endangered species act. SYRCL Executive Director Caleb Dardick says the Army Corps of Engineers operates Englebright and Daguerre Point dams which block salmon and steelhead from their historic habitat in the upper Yuba River. After advocating for a study to be done on ways to restore fish passage over these dams, Dardick says Congress has finally come through.

SYRCL is hoping that the study will also focus on fish passage.

Dardick says now those numbers are down to 8 or 10 thousand a year.

The Army Corps of Engineers and representatives of Yuba County Water Agency will be at the Madelyn Helling Library this evening to discuss the three year study and take public comments on what focus it should take.

click to listen to Caleb Dardick
The public will have until November 10th to get their comments in to the Army Corps of Engineers.

Written comments may be submitted until Nov. 9, 2015, and should be sent to U.S. Army Corps of Engineers, Sacramento District; Attn: Michael Fong, CESPK-PD-RP; 1325 J Street, Sacramento, CA 95814-2922 or by email to Michael.R.Fong@usace.army.mil. For emailed comments, please include “Yuba River Ecosystem Restoration Feasibility Study” in the subject line. 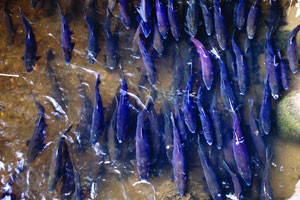