Submitted to KNCO-  Eleven people, including clergy and veterans, were arrested during two days of peace demonstrations at Beale Air Force Base, site of the surveillance drone Global Hawk, which performs reconnaissance for armed drones. The demonstrations at Beale were coordinated with Campaign Nonviolence, a national campaign calling for an end to war, poverty, and climate change. Over 250 nonviolent actions have been carried out in coordination with Campaign Nonviolence in the past week alone. 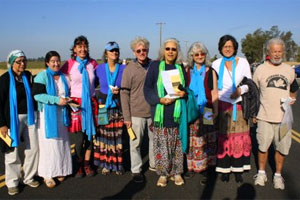 Two people were arrested at Beale on Monday, September 29, at 3:45 p.m. The Reverend John Auer, a retired United Methodist pastor from Fresno, was assisted in his wheelchair by Guarionex Delgado, a veteran from Nevada City. Mr. Delgado pushed Rev. Auer’s wheelchair the length of the mile-long road to the Wheatland Gate. Rev. Auer stated that he was attempting to deliver a letter to Colonel Phillip A. Stewart, the Base Commander, informing him of a recent anti-drone resolution passed by United Methodists in the California-Nevada region.

After he was released, Reverend Auer explained, “I oppose drone warfare because the more we depersonalize war the easier it is for us to fight, and to act as if it is not costing us anything. When we mechanize war it makes others expendable. Everyone becomes collateral damage…
I want to be able to say that we offered some kind of resistance and some kind of hope.” 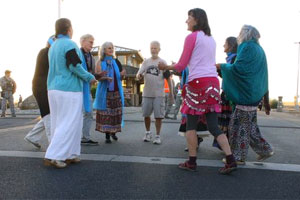 On Tuesday, September 30, at 7 a.m., several demonstrators gathered in a circle and began singing and dancing in front of Beale’s Main Gate. They explained that the dances were “Dances of Universal Peace,” taken from many different faith traditions, and that their purpose in dancing was to “demonstrate peace.”

Anti-drone demonstrators have kept up a regular presence at Beale Air Force Base over the past three years. Over fifty arrests for civil disobedience have been made; eight people have been convicted in U.S. Federal Court. Thirty-one arrests were made in March and April of 2014 alone. Sixteen of the demonstrators were summoned to be arraigned on September 9, but at the last minute all charges were dismissed.

Demonstrators vow to continue to nonviolently resist the violence and inhumanity of drone warfare. Find out more about past events and upcoming events at the Occupy Beale Air Force Base website or the Occupy Beale FaceBook Page.